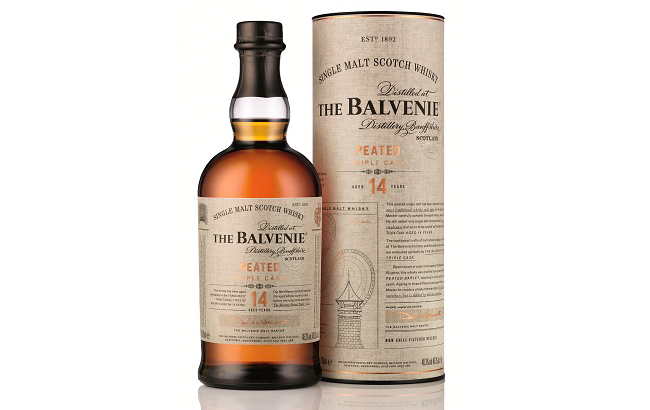 Smoky, peaty character of whisky is usually associated with the isle of Islay, where malted barley is most often dried with the use of a large amount of the local peat. Peat and smoke is also associated Longrow from Springbank Distillery and Ledaig from Tobermory on the isle of Mull. For some time now, however, a number of other distilleries that did not use to apply peat in the malting of their barley, have been releasing smoky editions of their whiskies. The ones that come to mind almost instantaneously include BenRiach, Ballantruan from Tomintoul, and more recently Torfa from Glenglassaugh. And though it might seem that Speyside as a whisky producing region is as far from peat and smoke as it can be, it was not always so.

A new expression of Balvenie, namely Balvenie 14yo Peated Triple Cask, was designed to draw on the region’s tradition. And the tradition is that also on Speyside peat used to be extensively used at the malt drying stage of whisky making. The latest creation by David Stewart and Ian Millar of William Grant & Sons is a whisky made with the use of peated malt. Balvenie have been using peated malt for nearly two decades now. It was never a full-scale operation – once a year Balvenie held what was called a Peat Week. It was then, for one week a year, that spirit based on smoky and peaty malt was produced. The whisky matured in first-fill bourbon caks, refill bourbon and refill sherry casks, hence Triple Cask. Described as “classic honeyed” whisky with “enhanced smoky notes,” offering “enhanced, delicate, sweet and lingering” peat smoke notes, it has been bottled at 48% ABV, without chill-filtering.

It is worth noting here that Balvenie is one of a handful Scottish distilleries that still using traditional malting floors. In recent years, there have been other Balvenie expressions offering notes of smoke and peat, however these were derived from additional maturation (wood finishing) in casks that previously held smoky Islay whiskies, and not directly from the application of peaty malt in the production process. One of such whiskies was Balvenie 17yo Islay Cask, which proved to be quite popular with whisky buffs.

The new Balvenie 14yo Peated Triple Cask is on sale in travel retail outlets at a recommended retail price of £65.