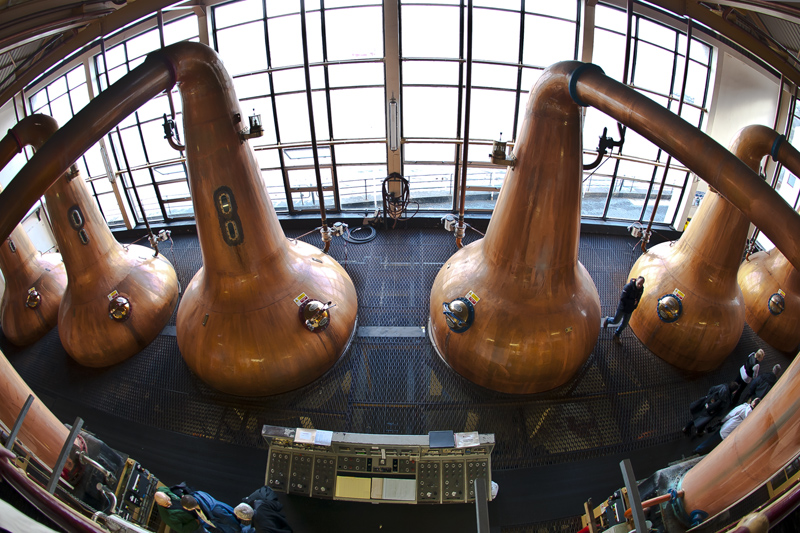 Caol Ila in a nutshell:

For many years the largest whisky distillery on Islay was know only for its 15yo single malt in the Flora & Fauna range, some Rare Malts expressions and a relatively rare independent bottlings. The situation changed only in 2002, when the new core expressions range hit the market. At that time, it consisted of a 12yo, 18yo and a no age statement cask strength expression. Apart from those, there is now a non age statement Moch expression, as well as a number of vintage and limited editions. The launch in 2006 of the unpeated Caol Ila was quite a surprise for those declaring their affection for the distillery’s products. The whisky is a result of experiments with unpeated malt that were commenced at the distillery in 1999. Since 2006 there is a certain amount of that Caol Ila variety bottled. In 2012 as much as 30% of the production was carried out with the use o unpeated malt. It is worth noting that unpeated whisky was produced at Caol Ila as early as the 1980s, it was used for blending purposes, and it helped keep the distillery alive during the whisky crisis of that period. Other distilleries were not so lucky, like Port Ellen, Brora, Convalmore or Dallas Dhu – to name just a few, all from the Diageo portfolio (then DCL).

Although the Caol Ila distillery, situated on its namesake, Sound of Islay, separating the islands of Jura and Islay, was founded in mid 19th century, 1846 to be more exact, not in the slightest does its appearance resemble the old, cosy stills from that period. The modern still house, with its huge windows overlooking Sound of Islay and the isle of Jura, looks more like the 1960s Clynelish than the traditional, 19th-century buildings of Dalmore, Balvenie or Speyburn. In fact, the present buildings of the distillery were erected during a major overhaul works carried out at Caol Ila in 1972-74. In short, the distillery buildings – except the warehouse – were completely demolished, and a new, modern distillery was build on the site. Before 1972 Caol Ila had only two pot stills, and the number grew to six during the expansion work, as a result of which Caol Ila became the largest whisky distillery on the island. The latest renovation work took place in 2011, when the number of washbacks was increased, and Caol Ila’s potential maximum capacity grew to 6.5 million litres of spirit per year. During the renovation work, the production of highly peated whisky for blending purposes was taken over by Caol Ila’s direct neighbour, Bunnahabhain.

Apart from the already mentioned renovation and expansion of the early 1970s, Caol Ila went through somewhat typical series of ownership changes, it got renovated and expanded in 1879, and in 1927 the plant became the property of Distillers Company Limited. It has remained in the hands of DCL, although these days the mother company is called Diageo.

The reconstruction of 1972-74 meant one more thing in addition to the expansion of the plant – it also meant decommissioning of the plant’s maltings and kiln. The characteristic pagoda roof topping the kiln disappeared, and the plant’s appearance assumed a more industrial character. Since that time, the distillery has been using malted barley from Port Ellen, which has been reflected in the character the whisky made here – the pre-1972 vintages are heavier, more “meaty” than the lighter, clearer spirit created here after 1974. Just like most Islay distilleries (except the newest, Kilchoman), Caol Ila has got its own pier, first constructed here in 1857 by the then owner of the plant, Bulloch Lade. For many years it was used to transport barley and coal one way, and whisky the other – by sea. At present all the logistics is done by land, with the pier being used occasionally by boats mooring here from time to time.

It may come as a surprise to many Caol Ila enthusiasts that the warehouse that is located on the premises (that white building with large “Caol Ila Distillery” letters on its front wall) is not used for maturing whisky at all. The entire production of the plant is tankered away and then put into casks on the mainland, where it is also left for maturation. And so, all the marine elements that can be found in the finished product will be a fruit of the tasters imagination, possibly suggestion, or they will come from the characteristic Islay peat – containing marine elements beyond any doubt. The large tankers that one can come across at the piers of both ferry terminals of the island, waiting for a ferry to the mainland, will very likely be full of Caol Ila new make spirit.
Show more entries from July 2016
This page uses cookie files to provide its services in accordance to Cookies Usage Policy. You can determine conditions of storing or access to cookie files in your web browser.
Close