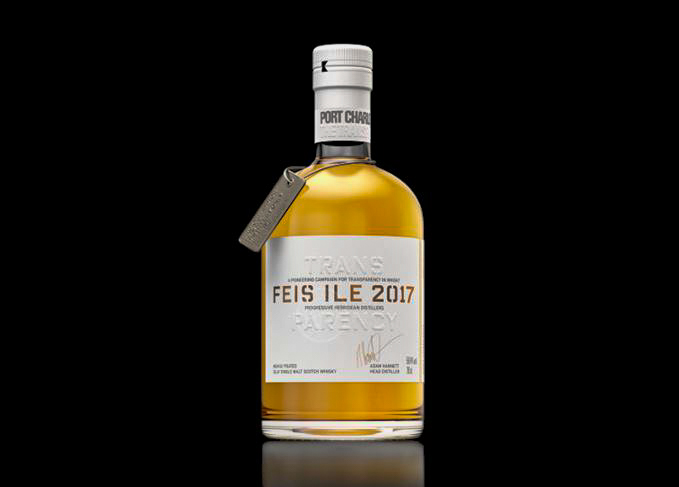 When we first wrote about this year’s Fèis Ìle special bottlings on the opening day of the festival on Islay [here], not all of those exceptional expressions had been revealed. In some cases, the distilleries waited for their appointed day before doing that. During Fèis Ìle each day the venue of the festivities changes – from one distillery to another. Each day another distillery hosts their special events and the celebration of whisky and music travels from place to place.

The Bruichladdich Day was on 28th May and on that day the distillery shop offered a new whisky bottling, prepared specially for the event, called Transparency. It is a peaty Port Charlotte, with no age statement (NAS), offered in a limited number of 1000 bottles, at £100 each. The whisky was composed of 12 casks, of which there were seven different types of casks.

Transparency is not just a random name in this case. Bruichladdich have supported the campaign launched by Compass Box Whisky aimed at such changes in the whisky legislature – or such an interpretation of the existing law by appropriate organisations – which would make it possible to publish information about the composition of each whisky, including the age of its components and their proportions in the final product. At present, the law allows the publication of the youngest component’s age. Thus, if we are talking about a whisky in which – for one reason or another – a very young spirit is just a small part of the final whole, its age, revealed on the label, does not reflect the value of the dram in question.

In October 2015 Compass Box Whisky got into trouble with the Scotch Whisky Association when they revealed not only the origin of each component, their ages, types of casks, but also their proportions in two blended whiskies recently launched – This is Not a Luxury Whisky and Flaming Heart. The Scotch Whisky Association deemed it illegal and asked Compass Box to withdraw the controversial information from their website. As a result, the information got published all over the internet – from nearly every major whisky blogger to the multitude of posts on most Internet forums.

In addition to the campaign for the changes in law, Compass Box Whisky were determined to find a loophole allowing access to the information by their customers. As it turned out, publication of the controversial information is banned, but granting interested parties access to the information – at their request – is not. And so, last autumn, when two new whiskies from the defiant bottler were launched – Three Year Old De Luxe Whisky and Spice Tree Extravaganza – Compass Box announced that the information about their composition can be obtained from the producer. In other words, one has to ask for that information, and the producer will be released from the obligation to keep the blend’s composition secret. Or – publication of the information is prohibited, but there is no reason why it should not be revealed when requested by customers. To make things even more interesting, the Three Year Old De Luxe was composed of 0.4% three-year-old whisky “produced near the village of Brora,” 90.3% whisky of a “different but considerably older” age from the same distillery , and 9.3% peaty whisky from the island of Skye. The tongue-in-cheek statement designed to scoff at the SWA no doubt – it doesn’t take Sherlock Holmes to find that there is just one distillery near the village of Brora, namely Clynelish. And the isle of Skye has just Talisker.

Putting aside the old cat-and-mouse game played by Compass Box, let us return to Bruichladdich on Islay and the recently held Fèis Ìle festival. Each of the individually numbered bottles of Port Charlotte Fèis Ìle 2017 Transparency, mentioned at the very beginning, carries also a batch code that can be used to access detailed information about the whisky’s composition on Bruichladdich website. So little and so much, one might say. What is more, a similar solution has been applied with the latest batches of The Classic Laddie and Port Charlotte Scottish Barley, and has been announced for the upcoming Octomore OBA Concept.

With the market flooded with no-age-statement whiskies, sometimes commanding prices beyond reason, John Glaser’s initiative and the practical support from Bruichladdich have to applauded and commended. Irrespective of the arguments that age alone does not make a whisky necessarily better, it does impact the final price. Therefore, it seems only fair that consumers should be entitled to be provided with complete information on whether they are being ripped off when reaching for their wallets to buy another bottle of whisky.