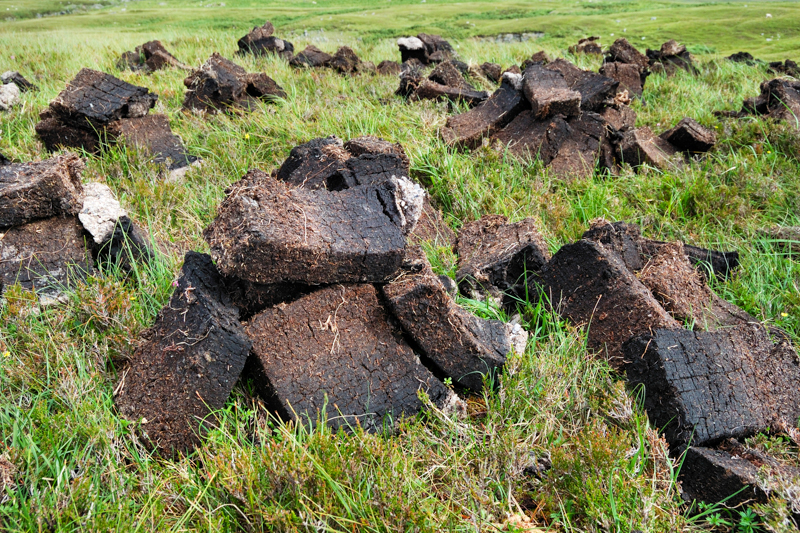 The peat season's on

When asked when is the best season for peat, many Scotch whisky enthusiasts would say that each afternoon. Preferably after work. To many Scots, however, peat is not just a smoky flavour in whisky. Until quite recently in many parts of Scotland, peat was a basic fuel, the cheapest and most easily available fossil to be burned when heating houses, cooking or baking. Those who have had the opportunity to experience peat burning in a living room fireplace will never forget the experience.

It so happens that Scotland abounds in peat. Vast and deep peat bogs stretch from the North Sea to the rocky and rugged coast of the Atlantic in the west. And on the island. It is estimated that the peat deposits on Islay alone will last for thousands of years, even if they keep being used at the current rate. Naturally, these days it is rarely used in the traditional way, as the basic source of heat. It has been largely replaced by electricity, natural gas or oil. That is probably why the first association it brings about will inevitably be a dram of aromatic, smoky whisky from the isle of Islay.

If you have ever stepped knee deep into wet, black and sludgy peat, you will find it hard to believe that technically peat is classified as sedimentary rock. Nothing rocky about it, it seems. Peat is wet and nasty if you chose it as the ground to step on or build upon, as proven by the experience of the West Highland railway line constructors. Or by those who have had a chance to drive along the road from Port Ellen to Bowmore – a stretch of road built on a peat bog, dreaded by those with motion sickness and a feisty driver. Peat is made up of decaying vegetation which has found appropriate conditions for specific type of transformation. Those conditions are to be easily found in Scotland, provided by the climate. In other parts of the world, like in Poland, peat bogs are rare and as such are protected areas, while in Scotland they are a most common element of the environment and sometimes are extensively used. And the season for that is upon us right now.

In order to cut peat for use as a fuel, one has start with the stripping of the upper layer of vegetation and uncover the wet and soft peat below. Some peat bogs can be several feet deep, and the peat is mined in layers of just over a foot, which sometimes leaves kind of terraces resulting from cutting individual layers. Peat is cut by means of a special kind of bended spade, referred to as tairsgear in Scotland, although various types and names are used (in Ireland it will be sleán). Knockdhu distillery, the manufacturer of anCnoc whisky, has used several of those as names of their NAS whiskies. Those spades – whatever the specific name – are used to cut bricks of peat out of the bog. It is a hard, physically demanding job, requiring specific skills and tonnes of patience.

The peat is soft and wet. In order for it to become a fuel, it has to be dried. And since in Scotland it usually either rains or is going to rain, cutting the peat has to be done with a perspective of enough time for it to dry before it is to be used in winter. Therefore peat cutting season in Scotland begins in May. Recent climate changes has made this part of the game slightly easier, however it will be the skill of the peat cutter that will decide whether it is done in time or not. Stacking peat bricks so that the rain does not affect the drying process too much is also a desired skill. Such stacks can be seen on Islay, but most often on Harris, Lewis and other Western Isles, where quite often it is still cheaper to cut your own peat and dry it, rather than pay for imported fuels.

Unfortunately, most of the above is just tradition and more often than not – history. For the needs of industrial maltings providing distilleries with peated malt, mechanical methods of peat cutting and drying are commonly used these days. And these inevitably tend to take out the romantic element of the whole process. However, no matter how the peat was cut and dried, its glow, the heat, the sparks and most of all the aroma when it is burned in a fireplace will blow any romantic scale. And if you add a glass of smoky, peaty whisky to the mix, the result is absolute bliss. And to experience this is our wish to all the readers of our online magazine on this last day of May, the first months in the Scottish peat cutting season.
Pokaż więcej wpisów z Maj 2017
Strona korzysta z plików cookie w celu realizacji usług zgodnie z Polityką dotyczącą cookies. Możesz określić warunki przechowywania lub dostępu do cookie w Twojej przeglądarce.
Rozumiem