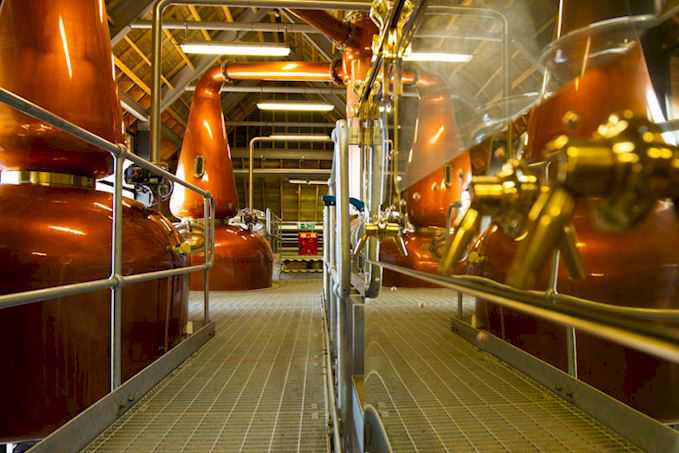 The first fully organic one

The Scotch whisky market is increasingly becoming rather crowded. What it might mean eventually for some distilleries is problems selling their products in the future. True, old and established stills will always find customers for their whiskies for years to come – hard to imagine there being too few customers for future releases of Caol Ila, Highland Park or Ardbeg – but most of the remaining crowd have to resort to more and more sophisticated marketing tricks to make sure the general public is at least aware of their existence, to maintain that awareness and turn it to their profit. Some of the well-tested methods is launching peaty expressions, and also those ridiculously priced, exclusive and limited editions whose destiny seems to be to decorate their Visitor Centre shops and impress the tourists with their designer packaging. Two examples that come to mind immediately are Tomatin with their peated Cù Bòcan and Tullibardine with their Vintage 1952 60yo at £20,000 – to explore the end of the alphabet for a change.

It seems the new distilleries appearing out of nowhere all over Scotland are by definition at a disadvantage. To start with, they just cannot launch a rare 1950s expression, and peaty whisky is not big enough an attraction to ensure enough public interest to finance the first few years of their existence. Not to mention the full-scale market competition in about a decade.

And this is where marketing comes in. After all, whisky making is a business, just like any other. What is needed is catchy stories, and not only by the newcomers to the market. Water creatures and local legends come in handy, and so do several generations of master distillers, coopers or even excise men – somehow linked with the distillery. A special location is also an asset – say the northernmost on the mainland, or where John Corr distilled for the king. Being located on Islay is a treasure, for years to come the market will buy anything that comes from the whisky island.

And let us make things clear – there is nothing intrinsically wrong with the stories. Although us whisky lovers would like to hope an excellent dram will follow.

Recently, the Internet has been electrified by the news of a new distillery being opened. And this time it is located in a remote, hard-to-get-to corner of Scotland, on Morven peninsula, where the B849 ends, or a bit further than that, to be precise. In short, it is situated where you cannot expect people to came incidentally. The new distillery had to find a way to get us interested. Well, it found two.

The first one would be placing itself at the top of the list of distilleries with most exotic (to non-Gaelic speakers at least), unpronounceable names. If Allt-a-Bhainne, Bunnahabhain and Abhainn Dearg are not enough for you, here it is – the Ncn’ean Distillery. Yep, you heard it right, Ncn’ean. Pronounced “nook-knee-an”. The name is a short form of Neachneohain, the name of a fairy queen from Scottish legends, also referred to as “the queen of the spirits”. Most appropriate, eh?

Apart from the name, changed to Ncn’ean from the original Drimnin, the distillery claims to be the first fully organic whisky distillery in Scotland. In the production process, it uses only organic barley from local fields and local spring water. It is entirely powered with renewable energy, and the by-products are used as cattle feed in the local farm. How much greener can you get?

There is more to Ncn’ean that meets the eye, however. If there was an old fart out there claiming that Ncn’ean is trying to get a prime market location entirely by means not related to the quality of the spirit itself, there is an ace up their sleeve. That ace is an involvement – until his death earlier this year – of the late Dr Jim Swan in the development of the project. An unquestionable authority in the industry, one of the driving forces behind the success of Kilchoman, Lindores Abbey (soon to be opened), also active in the business outside of Scotland. The names Kavalan, Amrut and Penderyn – to name just a few – stand for themselves. And Dr Swan stood behind them.

What seems to be a disadvantageous, remote location of the still might turn to its advantage, too. Nobody who has been to that part of Scotland has to be persuaded that it is arguably the most beautiful part of the country. And if you take a closer look at the map, you will find out that Ncn’ean’s close neighbours include some other breathtakingly located distilleries, namely Tobermory and Ardnamurchan. Moreover, there are regular ferry connections between Drimnin, right next to the new distillery, and Kilchoan as well as Tobermory. Kilchoan is a stone’s throw from Ardnamurchan, and if that is not enough, there is another pier right next to it, which could also be of use. And so, there are plans to arrange for joint tours of the three. Even Oban might get thrown into the mix as well. And that would make a whisky tour experience to die for.

The first spirit flowed from the Ncn’ean stills in March this year, but it was the announcement of its opening to the public as of July this year that has drawn a lot of publicity to the project right now. Tours will be available from Monday to Friday, on prior arrangement. Ncnean was not designed to be a large operations. Its present production capacity is just below 100,000 litres of pure alcohol per annum. Its new make ends up in ex-bourbon and ex-red wine casks. The final product is to be light a fruity, with the first expressions of Ncn’ean single malt whisky expected in 2020, when the first casks turn the legally required three years old. There is no need to wait that long, some of the first casks have been offered for sale at £3,000 for an ex-bourbon cask and £3,900 for an ex-wine cask.