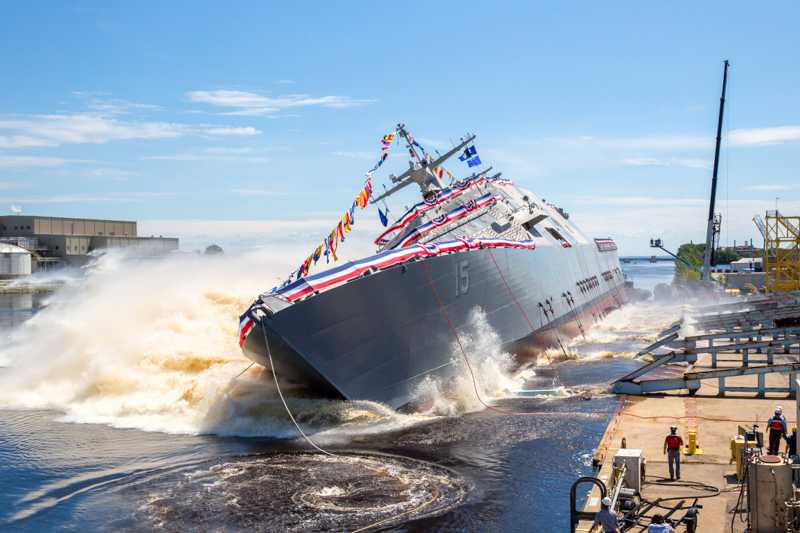 When you have to face the elements out there at sea on a daily basis, it would be a folly to leave anything to the fate. It is hardly surprising then that sailors are thought to be an extremely superstitious bunch.

One of the superstitions refers to the bottle of sparkling wine that is smashed against a side of the ship at christening. The bottle failing to break is thought to be a bad omen. Another superstition is placing a coin in the mast of a newly built ship. This refers back to the Roman times and the idea of having to pay to cross the Styx in the voyage to the afterlife.

A few days ago, when the newest US navy ship was being launched, a Freedom-class vessel worth $300 million, its side was hit with… a bottle of sparkling wine worth $8! As it turned out, the shipyard that had built USS Billings had performed a series of tests using various types of sparkling wine, including a bunch of champagnes. The aim of the exercise was to find a bottle that will not only unfailingly break in a wide range of temperatures and weather conditions, but also provide the biggest possible splash for the needs of the ubiquitous cameras – a crucial aspect of the whole celebration. Inexpensive bottle of Barefoot Moscato simply crushed the competition, so it became the bottle of choice when attempting to secure favourable winds to the newly launched vessel.

The custom of placing a coin in the mast of a newly-built vessel of another warship was reinforced – as it turned out 35 years later – with a miniature whisky bottle. HMAS Sydney, an Australian Adelaide-class frigate was launched in 1982. Last month it was retired and sent to a dock to be dismantled. It was only then that its builders, American shipyard workers, decided to reveal the contents of its main mast. Following the lead from one of them, the scrappers found a silver one-dollar coin and… a miniature bottle of Canadian MacNaughton whisky. Resisting the temptation to empty the bottle there and then, the scrapping crew decided to donate both the silver coin and the bottle to the Australian Navy Heritage Museum in Sydney.

For 35 years that HMAS Sydney spent in service, nobody knew about the coin and the whisky. It is hard to tell what the shipbuilders’ motivation was to stash whisky on board a warship. Moreover, it is extremely puzzling that it should be Canadian whisky stashed aboard an Australian ship by American shipbuilders. The ultimate mystery is, however, how many more vessels built in the same shipyard – or any other for that matter – carry similar cargo across the waters all over the world. It is worrying though that having heard about this one, some sailors might try to dismantle various parts of warships looking for similar stash.