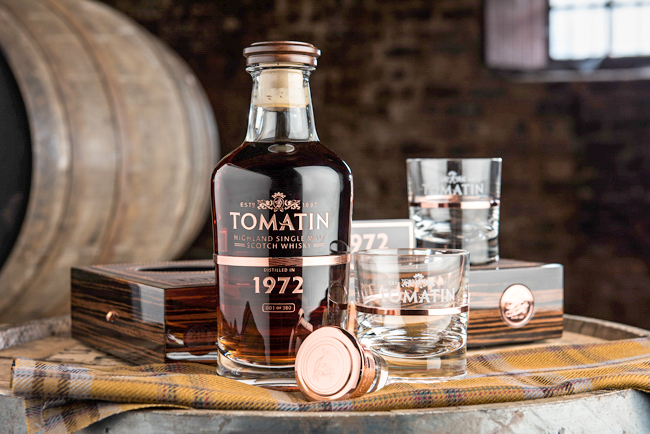 In the last couple of weeks or so the world of whisky has seen a handful of interesting premieres which we apparently failed to notice. High time we made up for that and brought you a summary of what’s new on specialist shop shelves, what’s new for the ever thirsty for new (provided they are old enough!) sensations labelled “Scotch”. Single malt Scotch most preferably. Well, not necessarily, on second thoughts.

Let us kick off with Tomatin. The distillery has been meticulously and systematically building its image as a manufacture of top quality single malt whisky. They have just released a limited edition of their vintage 1972 single malt. Tomatin 1972 Warehouse 6 Collection is a continuation of a series commenced with last year’s launch of the vintage 1971. The current release is a vatting of three ex-sherry hogsheads. It was bottled at cask strength, which is 41.1% in this case. It might mean (though it is not necessarily the case) that the alcohol level in one of the casks dropped below the legally required 40% rendering it necessary to vat its contents with some slightly stronger whiskies. Whatever the case, what was left in those three casks was enough to fill only 380 bottles. Recommended retail price is £2,000 per bottle. The whisky will hit the shelves in mid-August.

Tomatin also released a tea matured in whisky casks. Cooperation with tea experts from Eteaket resulted in the creation of a blend of Assam, Ceylon and Fujian teas which was matured in American white oak casks. Tomatin Whisky Barrel Aged Tea retails at £6.95 per 50g.

Another whisky premiere of recent days is a much younger Speyburn 7yo, released by an independent bottler, That Boutique-y Whisky Company. At first sight – nothing special, just another independent bottling of a relatively young whisky. However, the Speyburn is TBWC’s 100th release, so from the company’s point of view, it is a milestone. Its full name as it appears on the label is Supersplendiferous Speyburn Single Malt, it was bottled at 49.5%, and each of the 233 bottles (500ml) costs £46.95. There was one additional bottle, a full litre one, packed in an ornamental wooden box, designed to be auctioned for charity. The auction ended yesterday, but when contacted about the details, the organiser refused to disclose the final price it reached.

Let us jump back to a higher age category – well, a different category altogether, too – and have a look at Angus Dundee 50yo Blended Grain Scotch Whisky. Angus Dundee Distillers owns Tomintoul and Glencadam distilleries, but the whiskies that made up the venerable 50-year-old did not come from those. It was composed of the contents of five ex-bourbon casks containing grain whiskies, i.e. whiskies made with unmalted grain, including wheat, mixed with some malted barley and distilled in column stills. In this case the manufacturers got dangerously close to the verge of legality. Even more so than it was the case with Tomatin 1972. Angus Dundee 50yo was bottled at 40.1%. Available in travel retail outlets, it is going to cost £899 per bottle.

The Lost Distillery Company specialised in attempts at recreating flavour profiles of whiskies that were manufactured in closed down and often long forgotten Scotch whisky distilleries. The Company’s range has recently been added to by Dalaruan Blended Malt Scotch Whisky. The whisky is an attempt at recreating the flavours of one of Campbeltown whiskies. Dalaruan was founded in 1825, and a hundred years later, in the black dark period of the region’s history, was auctioned. The whisky as we get it now is described on the label as a blended malt since in fact it was made by vatting malt whiskies from a handful existing distilleries, producing whisky now. The original Dalaruan would have been a single malt, naturally.

The Dalmore distillery – definitely existing and producing at present – has broadened its range by as many as four different expressions recently. The first one is Dalmore Distillery Exclusive Vintage 2000, to be purchased exclusively at the distillery Visitor Centre shop. Bottled as a cask strength whisky at 52% vol., the whisky spent its initial years of maturation in ex-bourbon casks, with the last five years in merlot red wine barriques from California. The limited edition consists of only about 270 bottles offered at £200 per bottle.

Another new offer from the distillery seated at the banks of Cromarty Firth is not one, but in fact three new expressions making up the Dalmore Vintage Port Collection. These are whiskies from 1996, 1998 and 2001, matured initially in ex-bourbon casks and then transferred to tawny port pipes for the final period of maturation.

There is a rather unusual new whisky on offer from The Last Drop Distillers. Their tenth expression to date is a blended whisky from 1971. Its history began in 1983 when a standard 12-year-old blended whisky was created. Some of it was bottled and some was filled into ex-oloroso sherry casks and left to mature for another 9 years. After that period, some of it was bottled as a 21-year-old blend. The remaining whisky was filled into oak casks again and left in a traditional dunnage warehouse to mature even further. That last maturation period stretched to 24 years. In 2017 this whisky was acquired by The Last Drop Distillers and bottled – as a 45-year-old whisky. The label says The Last Drop 1971 Blended Scotch. The edition is limited to 1,352 bottles, each retailing at £3,000.

Finally, some news from the Loch Lomond distillery. Two different expressions, in fact. The first one is Inchmoan 12yo, matured in ex-bourbon casks (a combination of re-charred and refill casks), bottled unchillfiltered and with no colouring, at 46% vol. The other one is Inchmoan Vintage 1992, matured for 25 year in refill ex-bourbon casks. Both new whiskies were made with highly peaty malt and as such are representatives of the trend for distilleries to include smoky whiskies in their offer. Inchmoan is the name of one of the island on Loch Lomond. In Scots gealic, it is Innis- Mòine, meaning a peaty island – a most adequate name for a peaty whisky. The Inchoman whiskies will retail at £44 and £199 respectively.