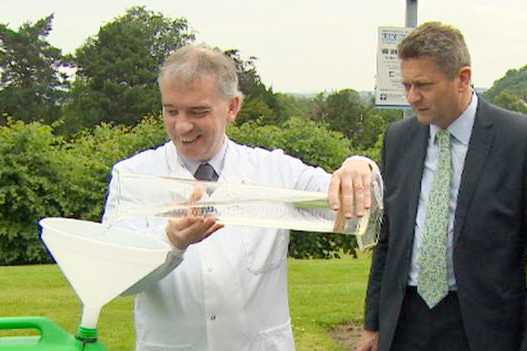 It is not a car that would require its tank being filled with high-quality single malt whisky. By no means. Other considerations aside, we would not expect it to become very popular. Or economical. However, we are talking about a car whose fuel was made with the help from whisky industry.

Perthshire-based and well known to your average whisky punter Tullibardine distillery cooperated with Edinburgh Napier University spin-off company Celtic Renewables Ltd aiming at the use of whisky production process by-products to manufacture biofuel. As a result of that cooperation, solid remains from the barley (draff) and protein-rich first distillation residue (pot ale) were subjected to a mysterious process called ABE to obtain biobutanol. Which, it turns out, is a perfect substitute for traditional car fuel. According to BBC Scotland, there is no need to modify the car’s engine, either.

The two by-products of whisky production process – draff and pot ale – are of no value to the whisky industry whatsoever, and are sold to farmers as cattle feed. If biofuel production based on these two raw materials proves economically viable, it could create a new industry worth £100m in Scotland alone. Not to mention other whisky-producing countries like Japan, USA and India.

A BBC Scotland reporter who has had an opportunity to test drive the biobutanol-powered car claims that she did not notice any difference between this and traditional petrol or diesel vehicles.