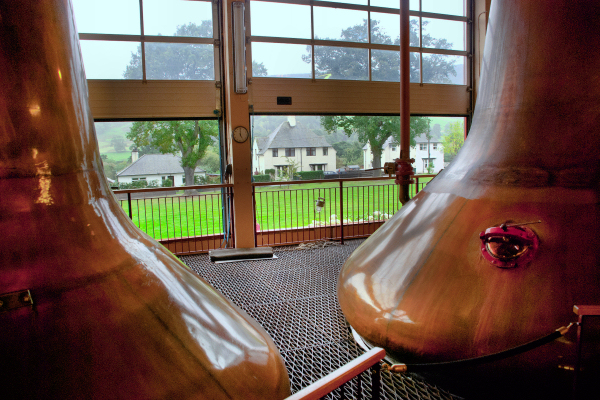 
The fact that the malt distillery’s Visitor Centre at Aberfeldy was named Dewar’s World of Whisky, relating the place to the whisky blending tradition, should come as no surprise to anyone. The distillery’s founding family have primarily been blenders rather than distillers. John Dewar’s two sons, John Jr and Thomas embarked on the distillery building project in 1896 to ensure a product that would become the key ingredient of their own blended whiskies, mainly Dewar’s White Label. It would take another century for malt whisky to become recognised and revered, to they naturally saw it as not much more than raw material. The distillery was located in a small village of Aberfeldy in the south-western part of the Scottish Highlands, in a picturesque spot right at on the bank of the Pitilie Burn, serving as the plant’s water source until this day.

Whisky production by the Pitilie Burn, in the buildings that previously housed a brewery, but also some distillation experiments had been conducted, commenced two years later, in November 1898. It has been running in a more or less uninterrupted manner – save two years of closure (1917-1919) brought about by war-induced limitations – for decades, and its product transported by rail to the company’s operational centre located in Perth, a couple of dozen kilometres away. What is left of the train that was used for that purpose can be still admired outside the distillery buildings today. In 1925 John Dewar & Sons was taken over by Distillers Company Limited (DCL, modern Diageo’s predecessor). In 1973 the plant underwent major renovation and expansion, as a result of which the number of stills was doubled – two new ones were added to the original two – which practically doubled the distillery’s capacity. Somewhat by the way the plant’s maltings were closed, which meant shifting to outsourcing of malted barley.

The first official bottling of the malt whisky produced here was Aberfeldy 15yo Single Malt Whisky, issued as a part of Diageo’s (DCL at the time) Flora & Fauna series, which was launched in 1991. A few years later, in 1998, the Diageo corporation, to which about half of all Scottish malt whisky distilleries belonged, came under the scrutiny of the UK Monopolies Board and was forced to sell the Dewar’s brand, together with associated distilleries. The transaction amounted to 1.5 million pounds, paid by another spirits corporation, Bacardi-Martini, and meant that Aberfeldy, Aultmore, Craigellachie and Royal Brackla left the Diageo house for good.

A year later a new, totally independent official whisky was launched – Aberfeldy 12yo single malt, promoted by the new owner. At the same time, a completely new investment was carried out, aiming at the opening of the place to tourists and whisky enthusiasts. Before that, no Visitor Centre operated in the distillery, and the year 2000 saw the opening of a kind of a museum showcasing the art of whisky distillation and blending named Dewar’s World of Whisky. Not only can visitors take a tour of the distillery itself, they can also see a vast collection of exhibits on the history of Scotch whisky, especially John Dewar & Sons Company, but also exhibits devoted to the characteristics of the various flavours and aromas in the final product and their composition when making blended whisky.