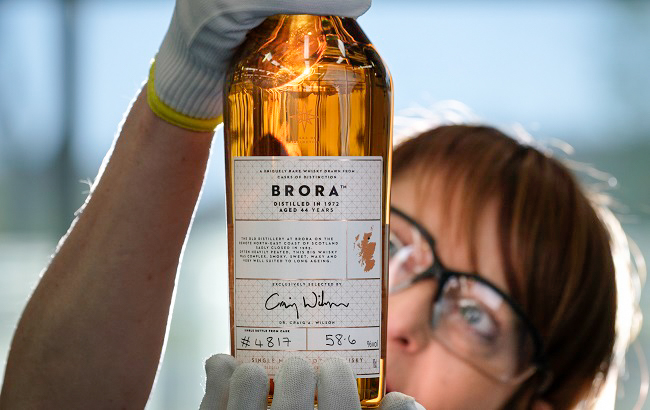 The Oldest Brora Sold at an Auction

Less than a month ago, we wrote here about an auction of extremely rare and collectible bottles of whisky, planned by the Hong Kong branch of Bonhams auction house for 19th May. It would have seemed that objectively judging, there were at least a few more interesting lots than the extremely old bottle of Brora 1972, yet it was the Bora that mesmerised the attention of the whisky-related internet.

Brora 1972 44yo is the oldest expression of whisky from the legendary distillery situated in the north of Scotland, in a town of the same name, on the Scottish coast of the North Sea, ever offered for sale. And if that were not enough, there was just one bottle drawn from a sherry butt filled in 1972, the fact that re-defines the meaning of “limited edition”.

Long before the auction, the internet literally sizzled over that unusual bottle. The question of how the tasting notes were written if there was just one bottle drawn, and it was offered for sale sealed. There were speculations about Diageo probing the collectible whisky market as to how much whisky connoisseurs, and above all collectors would be prepared to pay for what is left in the cask in question. One does not need to be a high-class specialist to know that the contents of the cask will yield only about 200 more bottles, which means each of them will be an object of desire for wealthy collectors. Therefore, it hardly comes as a surprise that Diageo want to sell such rarity as dearly as possible.

And the tasting notes? Let us face it – hardly anyone will ever need them. Brora 1972 44yo (or 45yo if the whisky giant chooses to wait a bit) will only sporadically make it to the snifters. The vast majority will end up as a kind of jewel in the crown of any whisky collection. Even Dr. Nick Morgan of Diageo described it as “the epitome of rare and collectible whiskies.” Besides, it was in fact enough to draw additional 20-30cl from the cask at the same time as drawing the bottle to be auctioned, so really there is no sorcery here.

And so it happened that the auction took place on the eve of World Whisky Day last Friday, and the Brora 1972 44yo fetched an incredible price of £14,500, far above the pre-auction estimates.