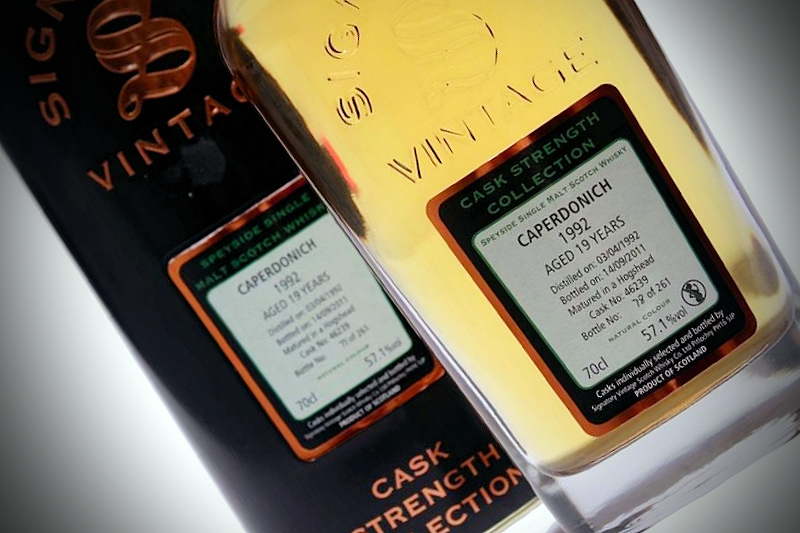 Caperdonich in a nutshell:

Although the Caperdonich distillery, sometimes referred to as Glen Grant No. 2, has never been promoted as a single malt brand, it is regarded as the hidden gem of Speyside by quite a few whisky enthusiasts, one worth every effort to discover. Even more so following the decision by the owner, Pernod Ricard, to mothball the plant, later to close it down entirely and demolish the buildings. There is a legend in Rothes, where the distillery used to be across the street from Glen Grant, about some dumbwits who were thirsty one night, bored a hole in the pipe running above the main street in Rothes and linking both distilleries (Glen Grant and Caperdonich). They were clever enough to bore that hole from below, so after their thirst had been quenched, there was no effective way of blocking the leak, and the whole intricate plan to secure themselves a source of free spirit fell through. There is no pipe these days any more, and on the spot where there used to be the Caperdonich buildings, there is a shiny modern plant that is not a distillery. Some links to the distilling industry have been retained, as the plant belongs to Forsyth’s, one of the leading manufacturers of copper stills, among others.

The decision to build a new distillery was made during the hay day of whisky making towards the end of the 19th century. It was finally opened in 1898 by James Grant, the owner of Glen Grant, but it survived only four years and got closed down in 1902. The crisis triggered by the Pattison brothers’ bankruptcy and trial brought about a lot of other victims in the industry – including Benriach and Imperial, to mention just a couple of neighbours – and it took long years for the wheel of furtune to turn back for the Scottish whisky makers. The Pattison crisis was followed by two world wars, prohibition in the USA and a world crisis – hardly providing favourable environment to the whisky industry. However, Caperdonich was not entirely closed down in the early 20th century. Its malting and kiln continued working, supplying the needs of the sister distillery, Glen Grant, belonging to the same owner.

Caperdonich had to wait for better times until the 1960s. It was reopened in 1965, following the success story of Glen Grant, mainly on the Italian market. It took just a couple of years for the owners to realise that even those two distilleries were not enough to cater for the ever growing demand. In 1967 Caperdonich (at that time still called Glen Grant No. 2) was expanded and its number of stills doubled to four. The change of the name took another decade. As a result of new regulations, two plants were no longer allowed to bear the same name, so Glen Grant No. 2 was renamed Caperdonich. A similar situation took place at Brora/Clynelish in the north of Scotland.

The wheel of fortune took another turn in 2002, a year after Glen Grant and Caperdonich had been taken over by Pernod Ricard, when the distillery was mothballed again. Its buildings were still linked by that famous pipe running over the main road in Rothes with Glen Grant, and its buildings were used as a filling store and warehousing space for Glen Grant products. In 2010, however, the property was sold to Forsyth’s, the buildings emptied and eventually demolished in 2011. Similar to Ben Wyvis, whose stills continue to be used at Glengyle, the Caperdonich still have also survived. Two of them travelled to Belgium, to the Owl distillery, producing The Belgian Owl whisky. The remaining two are to be installed at a new distillery in Falkirk.