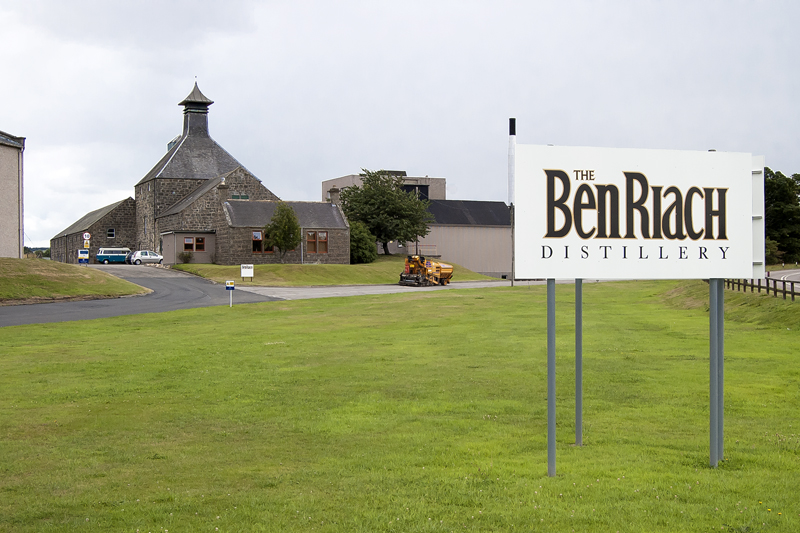 BenRiach in a nutshell:

Located by the A96, on the outskirts of Elgin, the BenRiach distillery was not lucky in business until quite recently. Founded in 1897, during the whisky boom of the late 19th century, it managed to survive only three years. Its founded, John Duff, had vastly contributed to the development of the whisky industry in Scotland – he had founded Glenlossie (1876) and Longmorn (1893). BenRiach, the last offspring of John Duff’s, was closed down in 1900 as a result of the crisis caused, or at least triggered, by the fraudulent activities and the fall of the Pattison brothers. And it remained closed for several decades. It does not mean, however, that nothing happened in BenRiach in that period. For a period of 65 years that BenRiach lay dormant as a distillery, its maltings remained active, supplying malted barley to other distilleries, predominantly to the next door neighbour, Longmorn.

Whisky production was resumed only in 1965, thanks to the efforts by the still’s new owner, The Glenlivet Distillers Ltd. BenRiach changed hands again in 1978, and it was under Seagram Distillers, its new owner, that peated whisky production was introduced in 1983, the number of stills was increased to four in 1985, an official bottling of BenRiach 10yo single malt whisky was launched in 1994, the maltings were decommissioned in 1998, and eventually the distillery was mothballed in 2002. The trial runs of highly peated whisky for blending purposes turned out to be a success. The BenRiach 10yo Curiositas, launched in 2004, was extremely well received, and it opened doors for the peated BenRiach to be included in the official core range of whiskies from the distillery.

Another transaction, this time for 5.4 million pounds, and another ownership change took place in 2004. This time, BenRiach became a part of Intra Trading (consortium of Billy Walker, an ex production manager at Burn Stewart, and two south African entrepreneurs), and it seems that since then there have been only favourable winds blowing for the distillery. In 2008 BenRiach took over GlenDronach, and in 2013 – Glenglassaugh. It is also the time of numerous new releases of whiskies from the distillery, including the peated Birnie Moss, already mentioned Curiositas 10yo, Septendecim 17yo, Authenticus 25yo and the various wood finishes and limited expressions. In 2013 the distillery reopened its maltings, which is an unusual move in the Scotch whisky world – normally it is the other way round, distilleries tend to give up the costly and time consuming process of barley malting, and buy their malt from specialised, industrial maltings.

The distillery being taken over by south African businessmen seems like an ironic echo of the attempts by BenRiach’s founder, John Duff, to start whisky production in Africa in the second half of the 19th century, though it has no significance to the still’s present functioning. It seems that the long forgotten distillery is now going through its best years, and the whisky expressions that it  brings to the market gain a lot of respect from whisky connoisseurs all over the world. No wonder it became the object of Brown-Forman’s cravings.
Pokaż więcej wpisów z Sierpień 2016
Strona korzysta z plików cookie w celu realizacji usług zgodnie z Polityką dotyczącą cookies. Możesz określić warunki przechowywania lub dostępu do cookie w Twojej przeglądarce.
Rozumiem