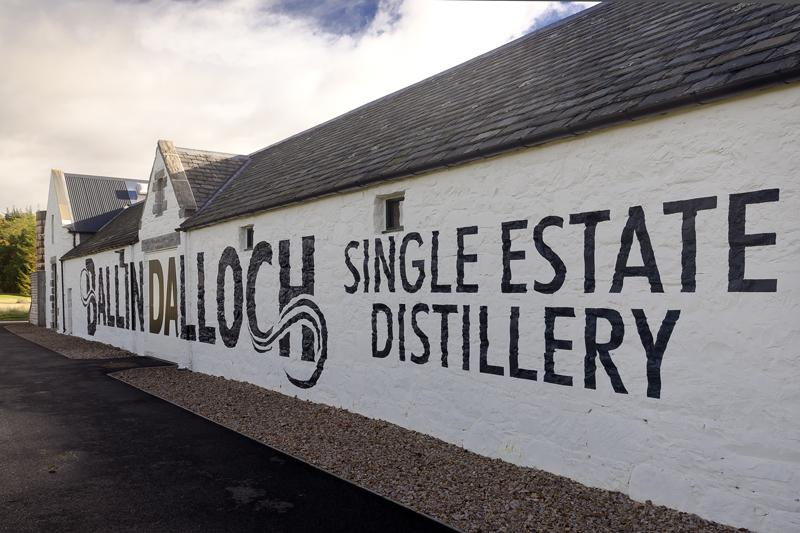 Ballindalloch in a nutshell:

Ballindalloch castle, located in the very heart of Speyside, by the main road leading from Grantown-on-Spey to Aberlour an further to Elgin, for years has been one of the more interesting and popular tourist attractions in this part of Scotland. Both for the convenient location by one of the major transport routes, but also for the unquestionable charm of the 16-century castle itself. Recently, the Ballindalloch estate’s attractiveness has increased through the addition of a small-scale, picturesquely located whisky distillery that opened there in 2014 and was named after the castle and estate – the Ballindalloch distillery.

The Macpherson-Grant family, owners of the Ballindalloch estate since 1546, are no novices in the world of whisky. Building the distillery, and more precisely, adapting existing farm steadings for the needs of whisky distillation, is just the Macpheron-Grants returning to the family tradition of whisky making dating back to the 19th century. It was the ancestors of the present generation who leased out a part of their estate to John Smith in order for him to build and run Cragganmore distillery. One could say then that one of the most renowned brands belonging to Diageo, one of the original Classic Malts of Scotland, lies in fact on the Ballindalloch grounds. What is more, when John Smith passed away in 1923, members of the Macpherson-Grant family became Cragganmore shareholders, together with the White Horse Distillers company. They eventually sold their shares to DCL (later Diageo) in 1965.

Construction work on the transformation of the farm steadings lying right next to the A95 into a whisky distillery commenced in 2011 on the initiative of the present owner and main resident of the Ballindalloch castle, Guy Macpherson-Grant. Ballindalloch Distillery, the only Scottish distillery to be located on castle grounds, likes to call itself a single estate distillery, stressing the fact that it is barley grown on the estate grounds that is used for whisky production, and the draff is used as food for the Aberdeen Angus cattle bred at Ballindalloch estate, a herd that the owners are especially proud of.

First spirit flowed off the stills here in September 2014, thought the official opening of the distillery took place in May 2015. The opening ceremony could not have been performed by any less than Prince Charles of Wales and Camilla, the Duchess of Cornwall. At the same time a Visitor Centre was launched, offering visitors tours of the unusual plant. As opposed to many new other initiatives of the kind, the Ballindalloch distillery being of noble breed is in no hurry to release fresh spirit or hastily sell young whisky – either bottled or in casks. The Ballindalloch owners have announced that they are going to wait full eight years before whisky from the new distillery will hit the market.   Those planning to visit Ballindalloch have nothing to worry about though. If you think your visit to the distillery will not be rounded off by a dram, you could not be further from the truth. In fact, instead of having to taste some immature spirit, the visitors are offered a complimentary dram of Cragganmore from private casks belonging to the family. The fact that visitors are offered exceptional whisky could be one of the reasons – possibly the main one – why a visit to Ballindalloch distillery will cost you much more than in any other still. In the summer of 2016 the basic tour of the Ballindalloch Distillery costs £35.

Devotion to the traditional whisky production methods is evident everywhere – from the barley grown on the estate through wooden washbacks to traditional worm tubs. The whole process is done by hand, without computers and automation that have infested nearly the entire whisky industry. Ex-bourbon and ex-sherry casks filled with the local spirit are transferred to traditional dunnage warehouses – made of stone, with natural floor, and casks stored on no more than three levels. The first one, a small building adjacent to the distillery, had already been filled up in May 2015. At present the casks are transported to another warehouse, located closer to Glenfarclas distillery.
Pokaż więcej wpisów z Wrzesień 2016
Strona korzysta z plików cookie w celu realizacji usług zgodnie z Polityką dotyczącą cookies. Możesz określić warunki przechowywania lub dostępu do cookie w Twojej przeglądarce.
Rozumiem