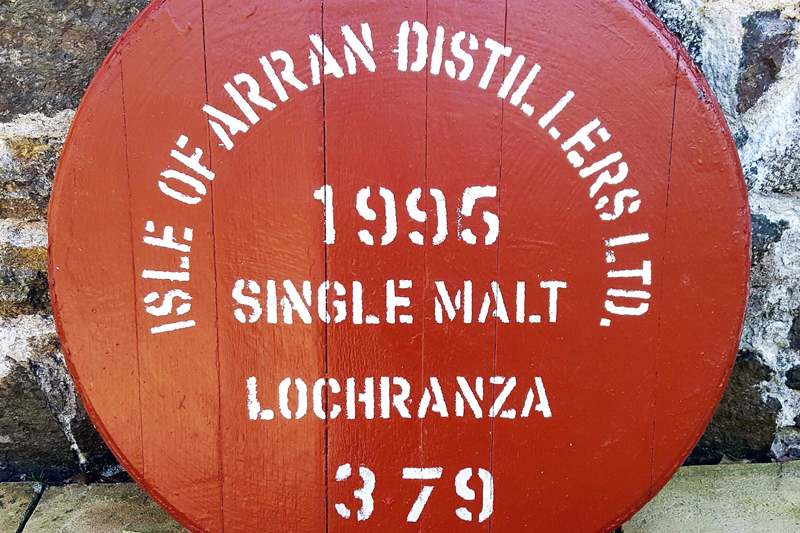 Arran in a nutshell:

Distilleries located on islands – be it Islay or any of the remaining ninety inhabited Scottish islands – have one undeniable advantage over their mainland sisters. Namely, they can use freely and widely their seaside provenance in the building of the distillery image and brand identity when marketing their products. And as whisky marketing specialists know only too well, a seaside location has had next to magical impact on the image of many a Scotch whisky.

It might seem odd then that the island of Arran, possibly most conveniently located on the map of Scotland – between Ayrshire and Kintyre peninsula, in the direct vicinity of Glasgow, and with perfect transport connections with the mainland – was not a location of any whisky distillery before 1995, when the present plant was built, named after the island itself. And that at a time when placing a new distillery on the otherwise stable map of the Scotch whisky industry was short of sensational. That is not to say that the art of whisky distilling was not known locally. To the contrary, in the 18th century there were several small stills, which went underground when the various regulations limiting or banning the freedom of distillation were introduced. When the law started treating distillers more favourably in the early 19th century, there was one legal plant operating on the island – its name was Lagg, and it was located in the southern part of the island, in a village of the same name. It was extremely short-lived, however. Lagg opened in 1825 and closed in 1837. No worry though, Isle of Arran Distillers have recently announced their plans to open another distillery on the island, and that is going to be in the village of Lagg.

In 1993 a consortium headed by one of the ex directors of Chivas Brothers, Harold Currie, registered a new enterprise, Isle of Arran Distillers Limited, whose aim was to build and run the first legal distillery on the island for 160 years. Distillery location decision was based on good quality water supply, as well as the island’s tourist potential in general. Arran is often referred to as Scotland in miniature, and regarded by many as one of Scotland’s most beautiful regions. The close vicinity of Glasgow and other towns and cities in the Lowlands gives a powerful boost to the local tourist business. The new distillery was designed to become a part of it from the very first moments of its existence. With that in mind, a Visitor Centre was a part of the whole plan, too.

The first distillation in the newly-built plant at the northern tip of the island, next to the village of Lochranza, took place in August 1995, and the first batch of the local spirit was bottled and sold just a year later. Naturally, it could not be called whisky yet. That would have to wait another two years, and in 1998 the first limited edition of Arran 3yo single malt whisky was launched. In the early 2000s, the Arran brand made its presence with a wide range of whiskies finished in a number of other tipples, including cognac, port, and even Château Margaux wine.

In time – the most precious element impacting on the quality of whisky – age-statement expressions of whisky from Arran were launched, from the 10yo which debuted officially in 2006 to the 18yo which was launched in 2015. In recent years, the tendency for wood finishing was limited considerably, in favour of focusing on the standard range, consisting now of a 10yo, 14yo (launched in 2010) and the 18yo. Most of Arran whisky is unpeated, yet once in a while they produce – and bottle these days – a peated whisky, manufactured with barley malted at 12 ppm. The peated Arran Machrie Moor was first launched in 2010.
Pokaż więcej wpisów z Październik 2016
Strona korzysta z plików cookie w celu realizacji usług zgodnie z Polityką dotyczącą cookies. Możesz określić warunki przechowywania lub dostępu do cookie w Twojej przeglądarce.
Rozumiem