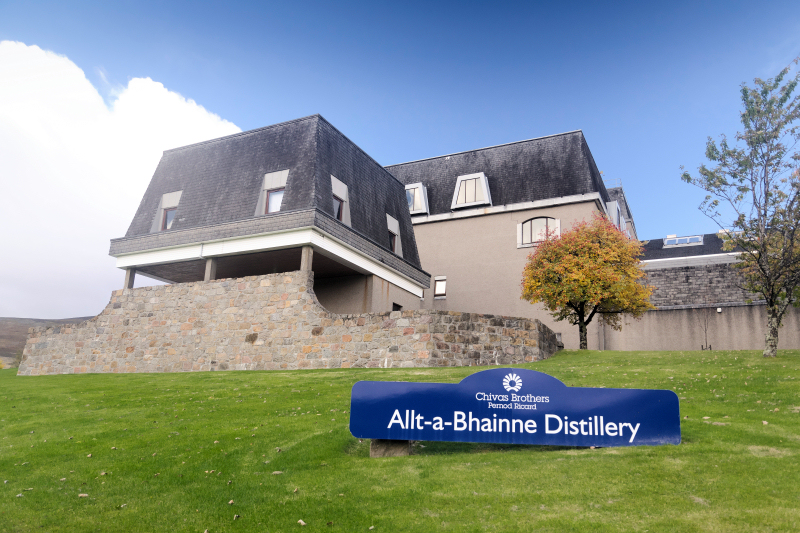 Traditional pagoda-imitating elements of the roof over some parts of the buildings making up the Allt-a-Bhainne distillery serve no other but decorative purpose, being only a reference to the traditional type of kiln roofs that used to operate in most Scotch whisky distilleries. Allt-a-Bhainne has never malted barley and such a possibility was never taken into account. The distillery was built in 1975 as an entirely modern plant in which the whole production process – from mashing to distillation – can be operated single-handedly. Its purpose was to make malt whisky as efficiently as possible for the needs of the Chivas Regal blends mainly, that belonged to Seagram at the time. As a result, it has never been launched officially as a single malt whisky, and its light, ester flavours can be enjoyed only thanks to the bottlings launched from time to time by independent bottlers.

Allt-a-Bhainne was the fourth distillery belonging to the Canadian spirits giant Seagram, the third of those erected by the company in the second half of the 20th century in Speyside. The company’s expansion commenced with the opening of Glen Keith in the late 1950s, which was followed by Braeval (initially called Braes of Glenlivet) in 1973, and finally Allt-a-Bhainne was built.

Perched by the road linking Dufftown and Glenlivet, among the gentle slopes of the Speyside hills, dominated by the peak of Ben Rinnes, the distillery looks modern, compact and... totally lifeless. The sight of modern and completely devoid of human life industrial premises brings to mind scenes from science-fiction or some of the older James Bond movies. As mentioned before, the plant operations can be controlled by just one person, so one should hardly expect much hustle and bustle in the yard. When it was built in 1975, it was equipped with just one pair of stills, but the number was doubled in 1989, doubling the plant’s capacity at the same time. In 2001 it was mothballed and was made again fully operational in 2005.