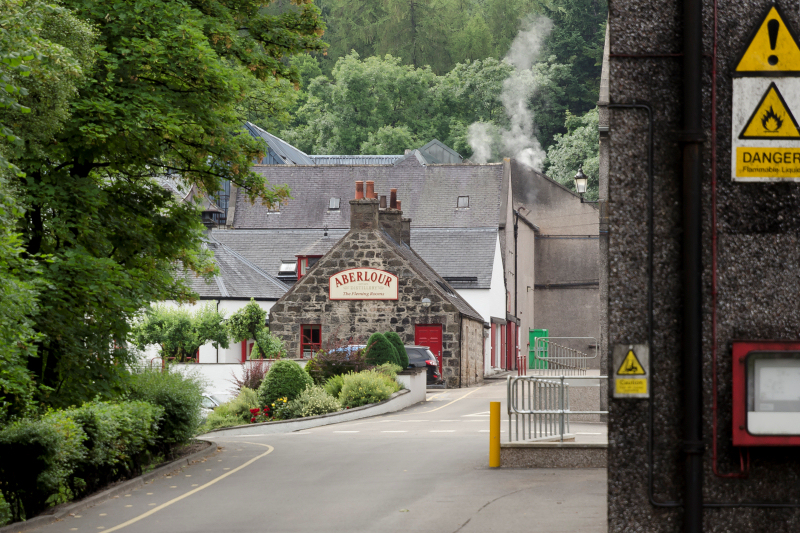 Aberlour in a nutshell:

Perched right by the A95, the main road through the Speyside region, running more or less along the Spey river itself, and passing through the village that gave the distillery its name – Aberlour. Founded in 1826 by James Gordon and Peter Weir and built some distance down the river from its present location, it burned down just over half a century later, in 1879. It did not even take a year for a new distillery to be built by James Fleming, a local financier, on its present location. Therefore, in fact we are talking about a totally different plant, in another location, so the distillery foundation date should be 1879 rather than 1826. It is that new distillery that used water from St Drostan’s Well, the source depicted on Aberlour whisky labels even today. For some time James Fleming also ran the Dailuaine distillery, situated just over two miles up the river Spey.

Anyway, it seems that Aberlour was extremely unlucky when it comes to observation of fire regulations (if they did formally exist as such in those days). In 1892 the plant was taken over by Robert Thorne & Sons, and only six years later it was almost completely devoured by fire again. Brought back to life to the design of the renowned architect Charles Doig, it has managed to avoid such disasters. In 1921 Aberlour passes to W. H. Holt & Sons, owners of a brewery located not far from Manchester. Immediately after the war, the distillery was purchased by S. Campbell & Sons. Campbell Distillers became a part of the Pernod Ricard corporation in 1974, which practically put an end to the ownership changes at Aberlour, with the exception of the merger between Chivas Brothers and Campbell Distillers (both companies belong to Pernod Ricard) in 2001 and creation of Chivas Brothers, to which the Aberlour distillery belongs today.

During World War Two, when the distillery capacity had to be limited for obvious reasons, local residents would carry the wash from Aberlour and distil it illegally by the Linn Falls on the Lour burn, some distance upstream from the distillery itself.

For a long time Aberlour was the second (after Macallan) brand offering high quality malt whisky matured in ex-sherry casks. There were, however, numerous whisky enthusiasts who would gladly award Aberlour the first place following the launch of the first batch of Aberlour a’bunadh in 2000 – an uncompromising whisky expression with no age statement, no filtering, cask strength, launched in relatively small batches, matured exclusively in sherry casks. Since that time, several batches of a’bunadh have been released, invariably one of the best widely available single malt whiskies of that kind.

From the technical point of view on the whisky production, major changes in Aberlour have included, among others, the decommissioning of the malting as early as 1962, and doubling the number of stills – from two to four – in 1973. The opening of a new, modernised Visitor Centre in 2002 is also worth mentioning, now that it offers a number of possible distillery tours and tastings of whiskies made locally.
Pokaż więcej wpisów z Listopad 2016
Strona korzysta z plików cookie w celu realizacji usług zgodnie z Polityką dotyczącą cookies. Możesz określić warunki przechowywania lub dostępu do cookie w Twojej przeglądarce.
Rozumiem