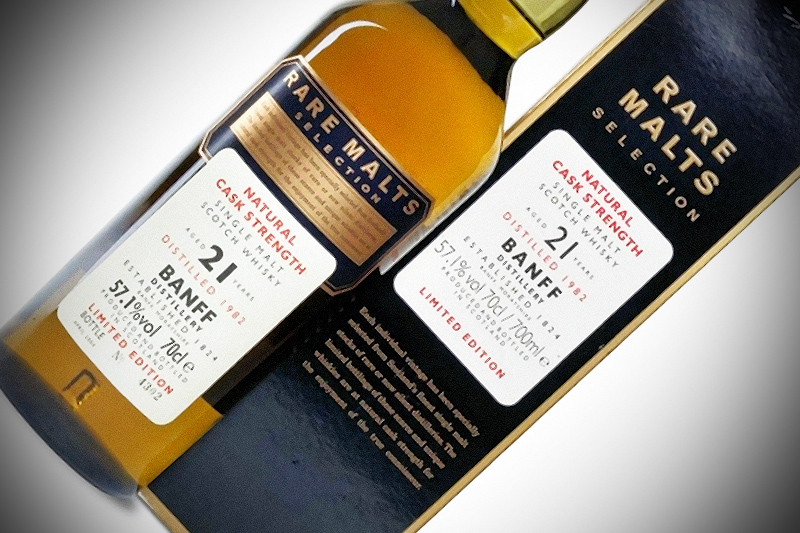 Banff in a nutshell:

If the Banff distillery still existed, its whisky could easily get marketed as one coming from the worst luck still in Scotland. There is a chance, however, that with all the disasters that have struck it, the plant would have to be closed down as the insurance premiums would ruin the business anyway. One way or the other, Banff seems to have been doomed.

Founded in 1824 – the same year as Glenlivet – the distillery was built by James James McKilligan in a small village of Inverboyndie near the harbour town of Banff. Less than three decades later, in 1852, it became the property of the Simpson family and it remained in their hands until 1932 when the company was forced to go into administration due to a slump on the whisky market, and was purchased by Scottish Malt Distillers (later to become Diageo). Back to the 19th century – in 1863, the old distillery was closed down by the then new owners and a new plant was erected at another spot, with a better water source and access to a railway siding linking the distillery with the Great North of Scotland Railroad. For a while there the new plant was called Inverboyndie, but later the name of the old still was adopted.

The bad luck that was mentioned in the first paragraph began haunting the still in its new incarnation, and never left it till its last days. In May 1877 a fire broke out in the production area and burnt it almost to the ground. It was only the warehouses that were left intact. As it was on the eve of the great boom in the whisky industry, the distillery was rebuilt within six months and production restarted in the same year. The new plant was equipped, among other, with its own fire engine to be kept on site.

During World War Two, in August 1941, a single German Junkers Ju-88 raided the distillery buildings, and one of the bombs hit a warehouse full of maturing whisky. The exploding casks and a river of burning whisky made a history. Apparently, the local cows could not be milked for another few days. They got so intoxicated on the spirit spilt on the meadows and flowing down to the Boyndie burn that they could hardly keep up on their legs. Clumsy behaviour by the local waterfowl, most evidently the result of overindulgence, was noted too. One of the firemen was charged with looting for sharing a drink with his colleagues straight from the helmet filled with miraculously salvaged spirit. To the German defence it has to be said that he actually seems to have known what he was doing – the distillery buildings at Banff had been requisitioned for the needs of the army during the war, it was a training base for foreign pilots who wanted to join the RAF, so bombing it was not just a case of thoughtless vandalism of wartime proportions.

Banff stood in flames one more time, after the post-war renovation and reopening, which took place in 1945. Truth be said, there was over a decade of uninterrupted production, but in October 1959 there was an explosion in the still house. Fortunately, there were no casualties, but a large part of the production space got damaged. When it seemed the last act of misfortune in Banff would be closing it down by DCL (later Diageo) in May 1983, and demolishing of the plant buildings one by one in the following years, in April 1991 a fire broke out which devoured the last remaining distillery warehouse.

The whisky from Banff was once – still under the Simpsons – bottled as Old Banff and supplied to the House of Commons in London. In its last years of existence and after it had been closed down, it was occasionally bottled, including the expressions from Diageo under the Rare Malts series, as well as from quite a few independent bottlers, including Signatory, Gordon & MacPhail and others.
Pokaż więcej wpisów z Wrzesień 2016
Strona korzysta z plików cookie w celu realizacji usług zgodnie z Polityką dotyczącą cookies. Możesz określić warunki przechowywania lub dostępu do cookie w Twojej przeglądarce.
Rozumiem