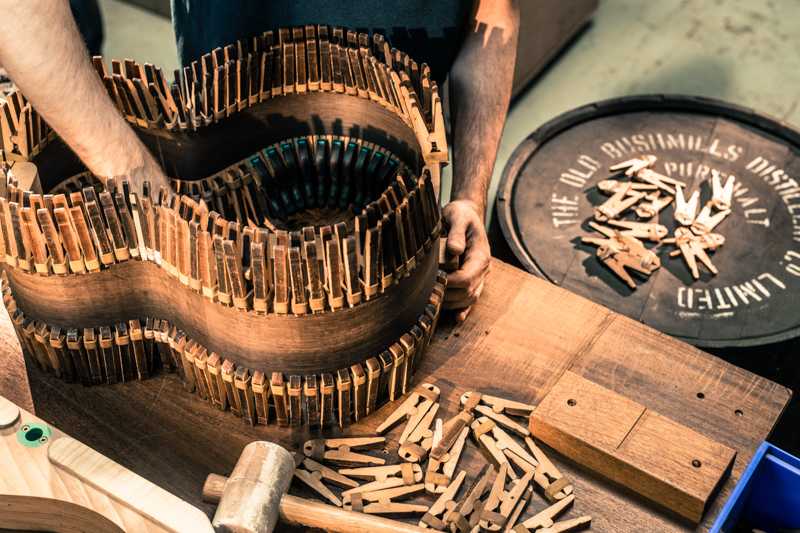 Used oak casks that are no longer good enough to mature whisky in are most often used to make souvenirs, garden and patio furniture, or they are simply chucked in front of the house, filled with soil and flowers. There have been reports of mega-hipster bicycles made out of them. Oak wood can also be used to smoke all types of meat, fish and cheeses. Oh, let us not forget about the fragment of Talisker oak incorporated in the soles of designer boots. With a hipflask attached! Well, whichever of the options you choose, used oak usefulness seems rather limited.

However, from time to time some absolutely fabulous things are done to oak. Next best to using it to mature good whisky in fact. One of them is the recent collaboration between Bushmills distillery and a renowned manufacturer of acoustic guitars, Lowden, also from Northern Ireland. Bushmills supplied the casks, and Lowden Guitars did what they are best at – made perfect quality acoustic guitars out of them. Apart from the Bushmills cask oak, the makers of the “Bushmills x Lowden” F-50 guitars also used ancient bog oak and some sinker redwood. As testified by George Lowden, whose guitars are used by the likes of Eric Clapton and Ed Sheeran, his sons and himself “scour the world for the best tonewoods” for their instruments’ sound and feel, so they relished the opportunity to work collaborate with the Bushmills coopers.

The project was dedicated to all those craftsmen who pass on their skills and experience from one generation to another. At Bushmills, there have been four generations of the Kane family working as coopers, and at Lowden Guitars, its founder George Lowden passed on his guitar-making skills onto his sons, a legacy to be handed down to future generations.

The “Bushmills x Lowden” F-50 was a limited project with only eight guitars available to buy directly from the manufacturers at [http://www.lowdenguitars.com/bushmillsxlowden#]. Each costs £8,500.