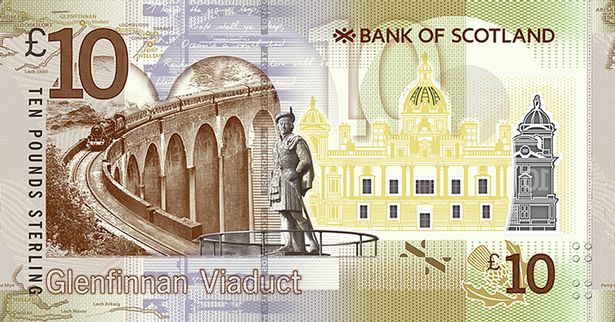 Many of those travelling to Scotland find it surprising to see banknotes in circulation there being different from those in other parts of the UK. Although the Bank of Scotland notes represent the same currency, have exactly the same value and are accepted throughout the rest of the UK – and the other way round – continental tourists may have problems trying to exchange the Scottish notes on return to their home countries. It is well-worth checking what your local situation is beforehand, or at the end of your stay, spend all the remaining cash – most wisely on whisky at the airport shops. Unless you are planning to revisit Scotland in the near future and can do with some spare cash during your next trip.

Scottish banknotes have always been designed so that they promote the country and its heritage, so they have always featured people and places relevant to the Scottish culture in one way or another. And so, the persons featured include Robert the Bruce, Sir Walter Scott and Robert Burns, whereas on the back of the notes you could find the Firth of Forth rail bridge, Brodick Castle or the stills in one of the Scottish whisky distilleries.

Bank of Scotland has now announced plans of introducing new polymer 10-pound note. On its front there will still be – as on the previous ten pounder – a portrait of Sir Walter Scott, whereas the reverse will feature the Glenfinnan Viaduct made famous by its “appearances” in the Harry Potter films. This time, on the viaduct there will be a historical steam train – the same you can embark at Fort William and make a trip to Mallaig on – a fragment of the map of Scotland with the train’s itinerary. In the centre there will be a picture of the Jacobite monument in Glenfinnan, the one commemorating the second Jacobite rising of 1745. Both the viaduct and the monument can be seen when travelling from Fort William (Ben Nevis distillery) to the isle of Skye, to see Talisker distillery (ferry crossing from Mallaig to Armadale).

The bank note will enter circulation in the autumn this year.