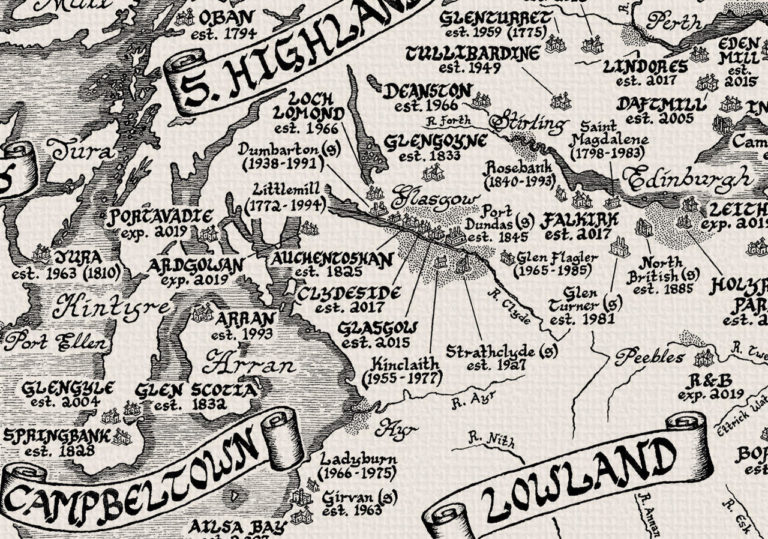 Draw your own map

The next best thing to own for most whisky lovers, besides an extensive collection of exquisite whiskies and possible a couple glasses, would be a nice map of Scotland showing the location of whisky distilleries. And if it were to be beautifully crafted, ornamented, it would possibly be the highlight of our whisky corner. A dream for many.

Souvenir shops and tourist information centres all over Scotland do make an attempt to make that dream of ours come true and offer commercial versions of such maps, but their attractiveness is often downgraded by the folds or their being out of date. Or both. We are living in times when hardly a day passes by without news of yet another new distillery development, and most likely even the most meticulous followers of the trend have lost track.

It seems there is a solution. One that Kevin Sheeban of Durham (it is in England, but well…), a cartographer by profession, a whisky lover by hobby, an American by origin, came up with. He also wanted to have such a map of Scottish whisky distilleries, so he… drew one for himself. It took him 120 hours, a bunch of pencils, pens and some ink. And loads of patience and talent, naturally.

His first version of such a map of Scotland was drawn in 2014. Since then two more versions have been created, including the latest one, the most up-to-date so far. Kevin also drew a Gin Map of Britain and Ireland and a map of the city of Durham showing all the pubs. In his opinion, it is not the drawing itself that is the greatest challenge, but the layout of all the elements and research. The latest version of the map shows not only 124 operational malt whisky distilleries, but also 7 grain distilleries, 25 recently closed (since 1970), and 11 upcoming plants. It features Arbikie, Isle of Raasay, Clydesdale, Dornoch, Borders, Drimnin, Ardnahoe, Holyrood Park, Leith, GlenWyvis, Jedhart and Mossburn – that were not there on the previous version.

Kevin Sheeban is also the founder of a company, Manuscript Maps, that prints and sells the maps he draws, of which – as one would have guessed – the most popular one is “A Map of the Whisky Distilleries of Scotland.”