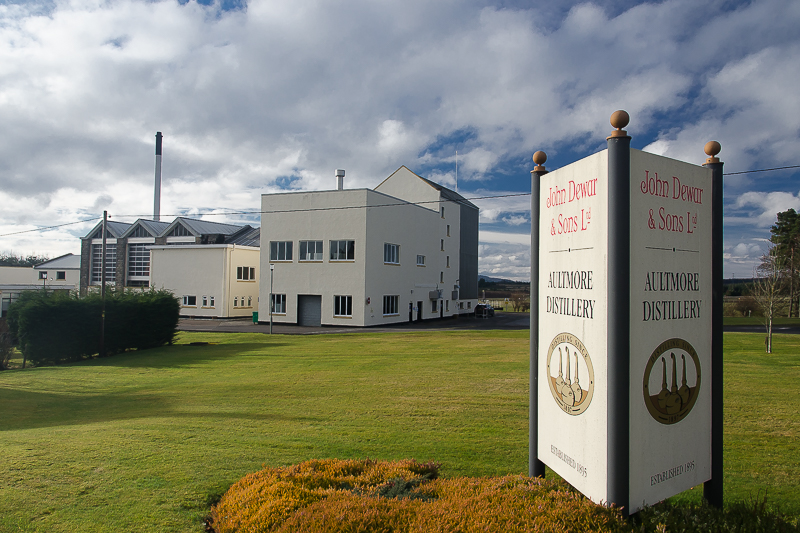 Aultmore in a nutshell:

One of the many distilleries founded in the whisky boom years of the late 19th century, after phylloxera had attacked French vineyards, which resulted in unprecedented shortage of cognac and brandy, the situation eagerly exploited by the Scottish distillers and blenders. Its development was not hindered even by the spectacular fall of the Pattison brothers in 1898, only two years after Aultmore’s debut. That is a surprising fact, given that whisky produced at Aultmore was used by the Pattison brothers in the creation of their own blended whiskies.

It was only when the Scotch whisky industry was hit by the disastrous effects of World War One, followed by the prohibition in the USA, that the owner and original founder of Aultmore, Alexander Edward, was forced to sell the plant to a bigger player in the game, namely John Dewar & Sons Ltd. The distillery has remained a part of the company until this very day, although John Dewar itself has managed to go through a number of owners in the meantime. At the moment, both John Dewar and Aultmore, as well as a number of other stills in Scotland belong to Bacardi. It is worth mentioning at this point that when John Dewar & Sons sale was being negotiated, Bacardi had one condition – the portfolio of the company being taken over must include the Aultmore distillery, otherwise there would be no transaction. This fact alone shows how valuable the distillery located near Keith on Speyside is, even though it might not look very impressive.

It was a whisky boom of the late 19th century that brought about the foundation of the distillery, and it was another boom, that of the late 1960 and early 1970s that doubled the number of Aultmore’s stills – from two to four – and doubling its capacity as a consequence. At the same time, as part of the plant’s expansion, the buildings that we know now were erected. Not a single bit of the old, original, 19th-century facilities has been preserved. As if that were not enough, 1996 saw the demolition of all the warehouses on the premises. The John Dewar & Sons policy in that respect was the same towards all of its distilleries – local warehouses were gotten rid of, and the spirit produced there is now tankered up to one of the major warehouse facilities belonging to the company, one of which is located in Glasgow, the other at Poniel near Aberfeldy in central Scotland.

At the time when Dewar's still belonged to Diageo, the whisky produced at Aultmore was available as a part of the possibly most known single malt whisky series, Flora & Fauna. It was a 12 year old single malt, which was launched in 1991. There was another Aultmore expression, launched in 1996, that belonged to another Diageo series, namely the Rare Malts. After the company was taken over by Bacardi in 1998, the local whisky was used almost exclusively for blending purposes for a long time, and except independent bottlings, it was not widely available otherwise. The first official expression of Aultmore under Bacardi was released in 2004, and it was a 12yo single malt. In 2014 the core range was broadened by a 25yo, 30yo and 21yo whisky, the last one for travel retail, that is mainly for shops operating at airports.
Pokaż więcej wpisów z Wrzesień 2016
Strona korzysta z plików cookie w celu realizacji usług zgodnie z Polityką dotyczącą cookies. Możesz określić warunki przechowywania lub dostępu do cookie w Twojej przeglądarce.
Rozumiem