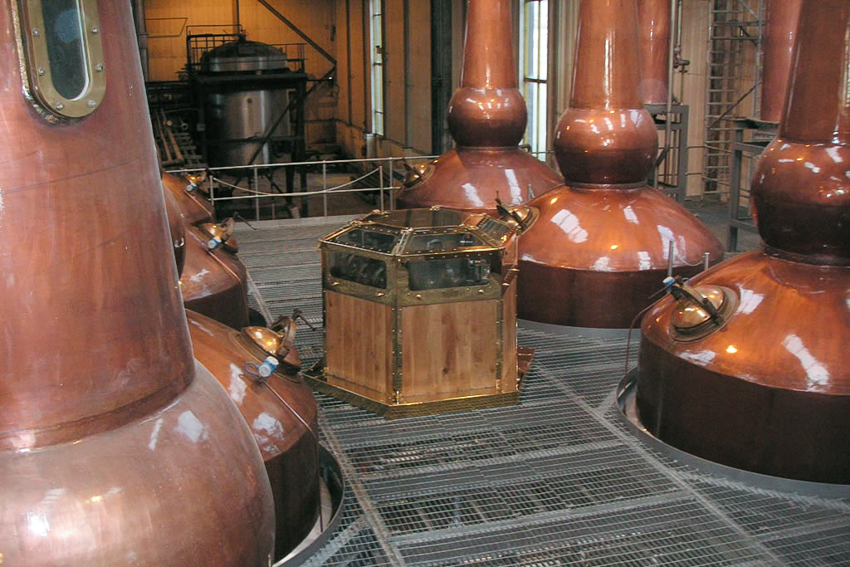 Ailsa Bay in a nutshell:

The distillery was named after an island, Ailsa Craig, a piece of rock standing out of the sea somewhere between the distillery and the southern tip of Kintyre, an island visible from Girvan, where a huge distilling plant belonging to William Grant & Sons is located. Built and furnished at an amazing pace in 2007 is supposed to produce spirit similar in character to the one that runs off the stills at Balvenie, and take its place in the blended whiskies produced by William Grant & Sons. What follows sort of naturally, is that we can expect more Balvenie single malt to hit the market in the foreseeable future, which is a thing to look forward to. If you remember the fact that Ailsa Bay is located exactly where there used to be Ladyburn, closed in 1975, the circle seems to be complete.

It is by no accident that the eight stills that have been installed in the new distillery adjacent to the large-scale Girvan grain whisky plant have a similar shape to that of the Balvenie stills. However, there is a secret – they are fitted with a system of independently cooled copper plates and additional valves that make it possible for the spirit to be influenced and its character more precisely shaped. It is a variation on the old Lomond stills, known in the distilling industry for over half a century, but almost entirely scrapped because of the maintenance problems they created. What is more, Aisla Bay produces spirit from malt at three levels of peatiness – from lightly peated to the level known from the isle of Islay. It is the highly peated variety, produced here for only one week a year, that is to be bottled and sold as Ailsa Bay single malt whisky. All the others are to become ingredients for blended whiskies.

That peaty whisky produced here was first launched in February 2016 (earlier, in the autumn of 2015, an early launch of Ailsa Bay took place in Scandinavia). A no age statement (NAS) whisky was described as 21 ppm peaty, which makes it a Laphroaig-level dram. In fact, slightly higher as the phenol level in Aila Bay is defined not on the malted barley, but the finished product. The Ailsa Bay label had another, rather revolutionary in nature, namely SPPM – sweet parts per million, a sweetness level definition. It is a scale, designed by master blender Brian Kinsman, is still to be learned by the whisky enthusiasts. For now, we know that the levels of 11 sppm and 21 ppm – as in Ailsa Bay single malt whisky – is a “perfect balance between peatiness and sweetness”, according to Alwynne Gwilt, a specialist working for William Grant & Sons, also known in the world of internet blogging as Miss Whisky.

In the case of Ailsa Bay, yet another deviation from the popular routine of traditional production methods has been made – still within the limits of what can be legally done to whisky. Namely, it underwent to the so-called micro-maturation. The new-make was poured into small casks, 25 to 100 litres, and left to mature for six to nine months. Only after that period was it transferred to standard American barrels (each approx. 200 litres) – from fresh oak through first-fill (used for the first time to mature whisky, previously used to mature bourbon) to refill casks, this time for a period of a number of years. After that the contents is married and bottled – in this case at 48.9% vol. All of the above is aimed at reaching perfect quality at minimum effort and relatively short maturation time. Did this work? The first batch of Ailsa Bay received good reviews, which leaves us all hopeful for the quality of the next batches.
Show more entries from October 2016
This page uses cookie files to provide its services in accordance to Cookies Usage Policy. You can determine conditions of storing or access to cookie files in your web browser.
Close